Take our free quiz and find out if YOU are sabotaging your own career success? Want to stop ‘group think’ and learn what your team really think? Try this!

I was listening to a podcast with Brene Brown recently, and she was talking about an activity that she gets her team to participate in to ensure they are avoiding the ‘bandwagon effect’, or the ‘halo effect’ and ensuring they are getting their teams real thoughts and opinions.

For those sitting there wondering what these phrases mean – The Bandwagon effect  is “feeling like you have to hop on-board with the consensus, even if you might disagree, vehemently or mildly. This often happens when you’re the only objector, or you’re the last to share and the group is already excited about an idea.”

The Halo effect  refers to “when team members see what the person with the most influence in the room wants and tells them what they want to hear, even if it defies their perception of company priorities and what’s feasible in a certain amount of time”.

Listening to the explanation of both of these effects really got me thinking about conversations I have had over the years with various teams, including my own, and how often I had walked away feeling clear on the next step, yet still feeling like something was missing. Like not everything that needed to be said had been. That things had been left off the table.  And no matter how many times you would ask people for their real and honest opinion, they would state that they agreed with the rest of the group. I have witnessed this unfold more times than I can count. Perhaps sometimes it is true, but I would confidently state that many times it is not. How do I know? Because I've done it myself.

Creating a safe environment and culture where team members feel they can be completely honest about their thoughts, ideas and feelings is critical to organisational success. The number of missed opportunities that go to waste because employees don’t really believe that they can be honest, is a huge cost to businesses. However, creating a culture where employees are encouraged to speak their minds, and then also having them, in the moment, push back on group thinking, is not always the same thing. Certainly driving a culture of honest, transparent conversation is necessary, but at our core as human beings we want to feel that we belong. Hence, being the only one with a differing thought or opinion to the rest of the group to which you ultimately want to feel a part of, is no easy feat – even when the right culture is in play.

My suggestion here when it comes to understanding human behaviour and driving the right culture in your Organisation is not an either/or approach – it is a both approach. Both are necessary, yet both impact each other.

What I like about the activity that Brene gets her team to embrace is its ability to remove the need for an employee to even be presented with the dilemma of the ‘bandwagon’ or the ‘halo’ effect.  Additionally, it pushes the employee to think for themselves, challenge their own thinking and opinions, which in itself is a muscle many of us need to strengthen.

In an effort to reduce the potential of the ‘bandwagon’ or the ‘halo’ effects, Brene and her team embrace an activity called the ‘Turn and Learn’ where all parties in the meeting or conversation will write down their thoughts and opinions on a question or concept that is posed to the group.

Then, all participants will turn their answers over at the same time. This reduces or removes the behaviour described above, and encourages deeper and more honest conversation about why people have the thoughts and opinions that they do, one by one.

It allows leaders to get a real and clear picture of what their teams really think, instead of walking away from a meeting thinking a next step was agreed to genuinely and wholeheartedly, when infact people were just telling you what you wanted to hear.

One of the best examples that Brene describes where this activity is used is one where the team are talking about what a realistic project delivery timeframe would be. Brene talks to the fact that as  the leader she is aware that her desires will always be the quickest timeframe possible, but in the same sentence, recognises that she neither always knows the depth of work that is involved to bring something to life, and that time estimation is an absolute weakness for her (I feel ya sister!).

Through getting the team to participate in the ‘Turn and Learn’ activity, they were able to have robust conversations about the real time it would take to achieve something, and then set realistic and achievable goals in line with this. A much better alternative to setting unrealistic timeframes that everyone agrees to just because the Halo (Brene) suggested it would be easily done and no one wanted to disagree. Surprise, surprise - deliverables are then not met!

Our role as leaders is to inspire, motivate, and drive our teams to get the best out of themselves and each other, in our quest to drive an organisation forward. In order to do this though, we must create opportunities for real and vulnerable conversations that see everyone’s opinions heard. If you know in your gut that you have conversations at times with members of your team, yes, even executive ones – perhaps consider trying the ‘Turn and Learn’ approach and see what depth of honest, vulnerable and real conversation that you achieve. You’ll probably find you learn a thing or two because your team are actually sharing their own opinion and thoughts, instead of just agreeing with yours.

Finally, if you or your team need some support to drive your leaders and equip them with the tools needed to lead and achieve successful business outcomes, let’s have a virtual coffee. I can promise you no B/S and no jargon, just real-talk and real conversation. Let’s connect.

Keen advocate for helping you get out of your own way!
[email protected] 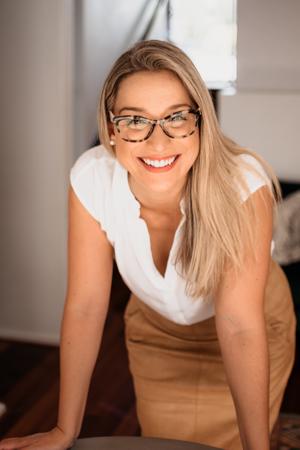 Author
Claire Seeber is a self-proclaimed travel addict, mini-sausage dog mumma, avid blogger, a lover of a good glass of pinot noir and believes a solid belly laugh should be part of your every day.

She is also a professional coach, speaker and People and Culture consultant. Claire started her business in 2018 whilst working full time as General Manager of HR for a large retail business. What she loves the most about the work she does is being able to work with passionate, motivated and courageous people who genuinely want to reach their full potential and are ready to put the hard yards in to get there.

The Role of Men in Lifting up Women With Marcia Lawrence

read more >>
The Mid Career Pivot: Where to Start When You Don’t Know What You Want to Do

Book your free 20 minute coaching consult here!Take our free quiz to find out if you are sabotaging your own career success!Get in touch!